Having succeeded in his ambition of becoming Britainâs most insufferable human being, Morgan bolted to New York City in early 2011, where he benefited greatly from the fact that few people knew the true extent of his irrepressible awfulness.

It was there that he took over the long-running Larry King Live slot on CNN, transforming the programme into a startling endurance of reprehensible, celebrity-baiting wank â all of which is apparently obvious to some American viewers, who have backed an online petition to have Morgan deported back to the UK.

The man who started all the uproar, right-wing conspiracy theorist Alex Jones, appeared on the former Sun editorâs show a few weeks ago in what was surely one of the strangest interviews ever conducted, with Jones assuming the appearance of an angry Cabbage Patch Kid that is trying to propel its brain through the top of its head.

Unfortunately Jones didnât succeed in jettisoning his brain, but his militantly incoherent spurt of bullshit did bring to mind other painfully awkward interviews from the archives, particularly Crispin Gloverâs 1987 David Letterman appearance, in which the actor seemed to experience a nervous breakdown live on the air. 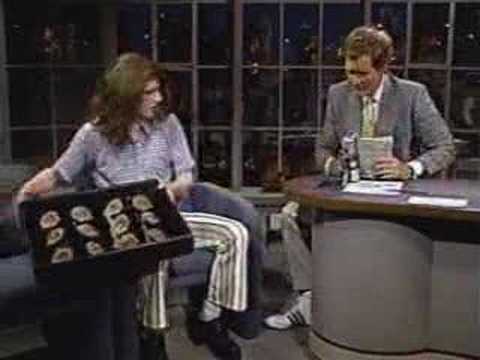 Unlike Jones, however, Glover later admitted that he was merely playing a character, which is also how Joaquin Phoenix explained his similarly strange interview on the same programme back in 2009, when he insisted that he was retiring from acting to pursue a career in rap music.

In the UK, Clive Andersonâs infamous interview with the Bee Gees is often seen as the apex of awkward interviews, but nothing surely beats Terry Woganâs toe-curling one-to-one with David Icke, the tragic Alan Partridge-like figure whoâs spent the last twenty years driving to Dundee in his bare feet.

Lesser known is comedian Mark Wootenâs appearance on Friday Night with Jonathan Ross, which has been repeatedly taken down from YouTube, likely at Wootenâs request. During the show, which also featured Nicole Kidman and David Schwimmer as guests, Wooten assumed his Shirley Ghostman character and made a number of bizarre jokes about Jews, cancer patients and Hitler: the âHoly Trinityâ? of bottom of the barrel comedy.

Similarly hard to watch was Ricky Gervaisâ interview with The Larry Sanders Show creator Garry Shandling, which was filled with so much tension that it had some viewers believing it was a brilliantly calculated comedy routine.

But it wasnât a comedy, at least not according to Shandling, and neither was Michael Howardâs infamous Newsnight interview with Jeremy Paxman, although his inability to answer a question was hilarious.

On the contrary, Ed Miliband is more than capable of answering the questions that are addressed to him, but only with a pre-prepared spiel about putting aside the rhetoric and getting around the negotiating table, because the government have acted in a reckless and provocative manner.

But what makes Piersâ interview exceptional is that it stands as a rare example where one canât help feel somewhat sympathetic towards Morgan. Through his bellowing madness, Jones not only proves that all Americanâs should immediately arm themselves, if only as a method of protection from his insanity, but also that it is possible to feel anything other than contempt for Morgan.

At least I think sympathy is what Iâm feeling. Itâs difficult to say. Itâs kind of like sympathy laced with contempt. Wait, no, itâs just contempt.